Tuesday Night Football: The Hot Ticket. Bill vs. Titans Who?

Tuesday Night Football: The Hot Ticket. Bill vs. Titans Who?

Bills at Titans, 7 p.m. | TV: CBS Tuesday Night Football
The Pick: Bills -3 (-120): This is not an easy game to figure out from a handicapping standpoint.

Bills at Titans, 7 p.m. | TV: CBS
The Pick: Bills -3 (-120): This is not an easy game to figure out from a handicapping standpoint. In a normal situation, we could treat the Titans as if they’re coming off a bye and are well-rested. The problem is that when teams usually go on a bye, they still practice. Tennessee has had only one practice — that we know about! — in two weeks. Yes, these are professionals, but that has to have some kind of impact on their performance tonight. My theory is that this game could be close in the first half, but then Tennessee’s conditioning becomes a problem for it in the second half. That allows Josh Allen and this Bills team to pull away late to get the cover.
Key Trend: Tennessee is 3-7-1 ATS in its last 11 home games.
Here’s what SportsLine is saying about the game: SportsLine’s all-time No. 1 expert Mike Tierney is 22-9 on picks involving Tennessee and Buffalo and he has a pick for Tuesday night’s game. 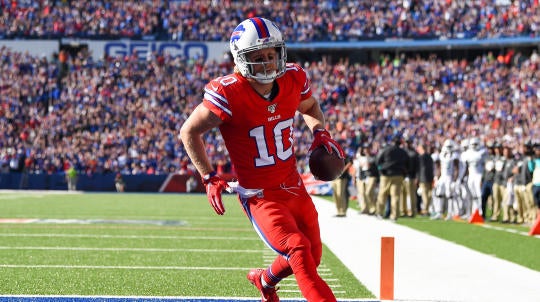 💸 The DFS Rundown
Your MVP or Captain
Josh Allen — Even before Josh Allen emerged as one of the top quarterbacks in the league this year, he was already a terrific fantasy option. His ability as a runner always gave him a high floor, and he’s begun raising it more thanks to his improved accuracy as a passer this season. Allen has thrown for 12 touchdowns in four games with Buffalo this year, and he’s added three more with his legs. He’s also thrown for no fewer than 288 yards in any game. He’s the obvious choice tonight.
Value
Cole Beasley — I like Beasley in single-game slates like this one because, while he’s unspectacular, he does offer stability. He only has one touchdown through the first four games of the season, but he’s a target-hog. He’s had 24 passes thrown his way through the first four games, which raises his floor a bit. Don’t be surprised if he sneaks in a touchdown tonight. If he does it could go from a good to great night for your lineup.
Full lineup advice
SportsLine’s team of DFS insiders has you covered for daily fantasy sports. Mike McClure has won almost $2 million playing DFS and is one of the top MLB DFS experts anywhere. Check out his MLB picks here, and be sure to see what he’s picking for NBA DFS here too. Use SportsLine’s all-new DFS Optimizer to get  optimal NFL DFS picks from 10,000 simulations.
🏈 Tuesday NFL props 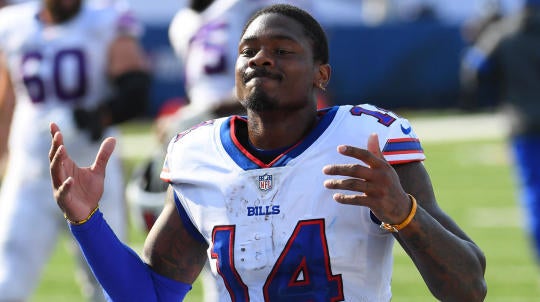 Bills Vs. Titans Who will Win?